The smell some nights

Once insignificant of sin, like all land,
_____ god visited this friable acreage twice—
_____ once in making, once in audit—

when god did range. Both times were
_____ quick, maybe efficient.

Recently the county painted a bike lane
_____ for the courageous, the driven self-healers
_____ of port-to-port rides, sponsored signs.

Could’ve been their sweat or
_____ the sweet-smelling diesel of barges on the river
_____ or of 3 a.m. truck races passing each red light

of the abandoned Coast Guard relay towers.
_____ Could’ve been the wind from the city

resting here. Could’ve been the two executed men
_____ slowly sinking under the cordgrass and the light
_____ inodorous spiders, who stepped

with their incredible knees
_____ over the metal-blown wounds of flesh and sand.
_____ The smell at night could’ve been all of this.

But not the locks of the new, red-doored condos—
_____ all of them red against pestilence.


A poem by a friend, previously known as Young Joe Bueter or, if you're feeling familiar, YJB.  But since he just had another birthday, this nickname is now stretching things a bit.  In any case, Happy Birthday Joe!  Youth and wisdom both look good on ya.

And...we're back!  I am up knitting, because I knit in the summer and jog in the winter - go freakin figure.  I've been listening to an episode of On Being that Amelia has been talking about for a month.  I promise to give the impression soon that I talk to people other than Amelia.  See?  Here I am talking to a Seahawk.

Listening to the episode, Remembering God, I had my mind sufficiently blown open by Christian Wiman's thoughts on religion, community, and the language we use to touch on what is sacred.  What's that?  Some tidbits, you say?  I thought you'd never ask.

On needing to go to church and have specifically religious elements in his life, he says, "One of the ways we know that our spiritual inclinations are valid is that they lead us out of ourselves."

On needing religion, but outgrowing orthodoxy, he says:

"There is some combination of austerity and clarity that I think we as a whole culture are grasping toward and the main movement of the culture is against it [the political parties' trash talk, etc]...but I do think there is this huge cultural grasping toward something that won't be so fru-fru, and slip out of our grasp, and just make us think it's ridiculous, and yet also something that is open enough to engage those parts of us that we don't understand."

I don't really have a good segue back from the marvelous early Texas-Baptist fed heart of this man, except to say, you should probably listen to the whole gorgeous episode.  Knitting alongside it is optional.

In other news, I am finishing up a story for my friend Lukis Kauffman's podcast, The Storied Commute.  Soon enough, you will be able to hear some of my fiction set to pretty intro music, and read by someone with a perfect radio voice.

It is time to dream!  Then wake and find the kettle.

Sweet dreams to you and all your sheep,
Kara

We Three
by Rumi

My love wanders the rooms, melodious,
flute notes, plucked wires,
full of a wine the Magi drank
on the way to Bethlehem.

We are three.  The moon comes
from its quiet corner, puts a pitcher of water
down in the center.  The circle
of surface flames.

One of us kneels to kiss the threshold.

One drinks, with wine-flames playing over his face.

One watches the gathering,
and says to any cold onlookers,
This dance is the joy of existence.
~~~

I am filled with you.
Skin, blood, bone, brain, and soul.
There's no room for lack of trust, or trust.
Nothing in this existence but that existence.


I am up writing birthday cards and tracking finances.  I know, it is a glamorous life.  Someone has got to live it.

I was thinking earlier in the day, Where O where has my Rumi gone?  Not the book, but the obsession.  I needed a dose of devotion tonight, and also, I wanted to share this video, which was worth the watch for me (though I totally understand if it's not for you).

In other (abysmally domestic?) news, we got an air conditioner finally, which is helpful because, as my boss put it today, somehow the difference between 95 degrees and 104 degrees - which we've been hitting lately - is like having a magnifying glass aimed at the back of your head.  On the upswing, I have been crazy relaxed.  It could be that my brain has melted, but as I swing languidly on the porch and nod stupidly as my husband converses with me, I am reminded of the slower pace of hot climates, and how sometimes, in North Carolina, all that is called for is iced tea and conversation - all agendas can wait.

I have little to no agenda right now, anyway.  It may be self-preservation; lizardlike, I perch in place, praying for October to get here.  In the meantime, I plunge lettuce into cold bowls for washing and spritze rose water on my face and move only when provoked or when due at work.  Life is simple.  Hot, but simple.

I wish I had more to tell you.  Oh, wait!  I do.  My friend Amelia and I started a blog called Grizzly and Golden.  You can see us goof off here.

With this, I leave for the tucking-in hour.  But first!  I shall visit that most perfect room in the house, a place with two faucets that pour forth glorious icy waters, the room with peppermint oil and peppermint toothpaste, where my dog naps while anyone showers - you better not need privacy around a border collie - the room with the window that opens to the alley where the lilac bushes, long past bloom, staunchly hold back the dust until autumn.


My husband, like many people in his family, has enormous hands.  His dad is a carpenter, and his uncle, who also farms, makes dulcimers.  His mom, who has fine, delicate hands, makes the fluffiest loaves of wheat bread I've ever eaten, and she used to make bread for the local grocer when Tim was little.  Watching her knead and shape dough is like watching a potter at her art.  There is nothing quite like the busyness of her hands fluttering over the dough, shuffling flour over its surface, propping it up and then smashing it down gently, over and over, a hundred soft movements working the yeast through the flour and years of experience into one loaf.  She does it casually, never carelessly.  It is an incredible thing.  It is like watching something being born, and I find myself holding my breath at the end of the counter, marveling at her expert nonchalance.

When I go to Tim's childhood house, where this bread is made, I feel like a Lego clicking into place.  Not because I have a lot in common with rural Ohioans, though I have a bit.  And not because I am fully seen and accepted for who I am, though I probably am.  I feel like I am home when I step onto the slope of my in-laws' land because I feel the sort of pace that can only be set by industrious human hands.

Last week, when Tim was out of town, I picked up a favorite book, Nikki McClure's Collect Raindrops - The Seasons Gathered, and read through its pages.  I wanted to visit its advice for celebrating the summer season, but I became most enamored of its introduction.  McClure writes:

Every year since 1998, I have printed a calendar noting the month-by-month change in orbit.  My first calendar offered small and quick gleanings with every month.  The calendars have now evolved into detailed, yet sparse instructions on living life where our hands matter. 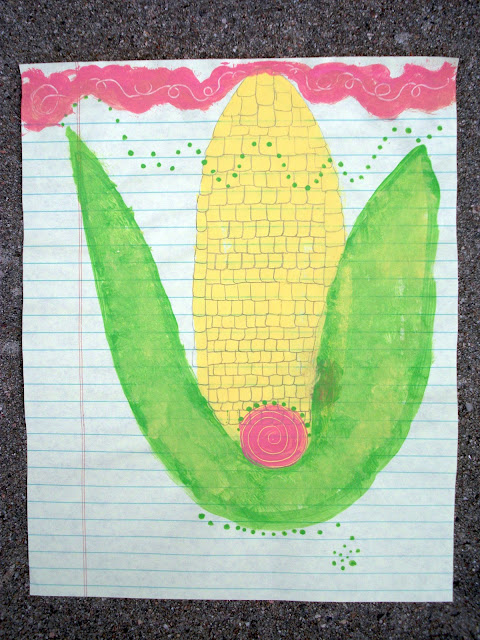 I became obsessed with the phrase where our hands matter, and thought about all the ways I use my hands that make me enormously happy: baking pies - rolling out the buttery dough on our scrubbed counter top; writing letters to my friends - inking envelopes and pages with whimsical stamps; knitting - sitting up in bed as Tim snoozes or tucking needles and yarn into my backpack for an airplane ride.  Ever since I came across that phrase, and revisited McClure's images of the ways our hand-made impulses connect us as people, I keep thinking of the simple ways I craft little hobbies, and the sheer joy these pet projects bring.

This is the simple beauty I embrace these days.

The Uses of Light
by Gary Snyder

It warms my bones
say the stones

A high tower
on a wide plain.
If you climb up
One floor
You'll see a thousand miles more.

It's time to change the pictures on my site, I know.  It's freaking hot in Colorado - no snow at this altitude anyway, and half the state has been on fire for some weeks.  I find myself addicted to ice cubes, air conditioning, and sitting on my porch.  When the day has finally calmed down, I tether my dog to the railing.  While he acts as sentry for the entire neighborhood, scanning the sidewalks and peering into shadows for any cats, I sit on the porch and swing.

Today I write for three reasons.  The first is because I re-discovered this week that I sort of lose my mind when I put chores before writing.  Tasks rise up monstrously, and I lose perspective on what makes me happy.  The second is because I listened to Arlo Guthrie on npr's American Roots yesterday.  He was talking about his dad, Woody, on whom the episode centered, and what he said was so wonderfully heartening.

I have to paraphrase, because it's dangerous to transcribe a radio program, and also because I've been looking for the section of the two hour episode for the last 30 minutes, and I can't find it.  If I remember correctly, Arlo was speaking in reference to the evolution of his father's song, This Land Is Your Land, which was originally a satire of God Bless America before it was embraced by the country as a champion song for democracy.  Arlo says (something like) "Presidents come and go...but the people endure, and I think my dad would be proud to remind people how important it is to be a person, and do something without waiting to see what other people are gonna do about it."

It sounded better when he said it.  It was exciting enough to drop my dishes back into the sudsy sink from whence they came and run to the drawer for a pen.  And as I scribbled, trying to capture Arlo's words, I thought, yes, yes - it is our essential selves, our existence as people, that matters - that binds and informs us, and knits the meaning of our lives into something we can hold.

And finally, the third reason I write is to circle back on the mind's ability to lose the heart's focus.  I heard Leftover Salmon's version of Waylon Jennings' Are You Sure Hank Done It This Way on the way home from a swim in the Poudre River this morning, and ran inside to blast it.  Here is Waylon for you, and (bonus!) Johnny Cash introducing the clip, as a reminder to stay close to the home of your heart.  Enjoy, stay cool, and most importantly, keep on being your own bad ass self.