Last night, when I was corresponding with my brother about a running event in November, he complained that when he turned 40, it was like crossing "some thermocline of achy-ness."

Of course, I had to Google the word thermocline then.  What I found, among some pretty great images and weird diagrams, was this definition:

A thermocline refers to a boundary of water which separates regions of warmer water from the colder water below. A thermocline is formed by the effect of the sun, which heats the surface of the water and keeps the upper parts of the ocean or water in a lake, warm. Water near the bottom remains colder as sunlight doesn’t penetrate enough.

Cold water by nature is denser that warm water and gravity keeps it under the less dense warm water. This causes a distinct line or boundary between the warmer water which is less dense and the colder denser water forming what is known as a thermocline. The difference in temperature between the warmer and colder waters may be of several degrees and drops even further each meter below you dive.

Some of you smarties may already know about thermoclines.  My bro learned about them in scuba class, because he's cool like that.

I just love the idea of a watery boundary, definite like a solid mass, but aqueous like - well - like water.  Cold water.  There is something intoxicating to me about the idea of deep, cold, dark water.

It also kind of gives me the willies to think about.  You?

I originally imagined a wholly indulgent post, into which I copied and pasted some of the fascinating graphics that appeared when I Googled thermocline this afternoon.  But you know, the magic is sort of lost now that I'm not at work.  Something about carpeted hallways and 8 hours inside can really make a graphic seem hilarious. 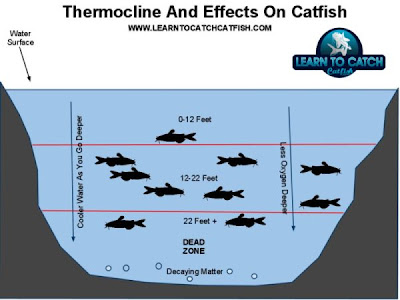 Although, this one is still funny, right?

I guess it's funny unless you're a super serious catfish hunter - er, fisher-person - or you are looking to, as the website suggests, Learn to Catch Catfish!  (Exclamation mine, although they should really think about adding it to their design, in my opinion.)

The summer before Tim and I moved to Colorado, we had the great fortune of volunteering on a team of biologists in Arizona, counting and safeguarding goshawk nests.  I was alright at the job.  I like to hike around and sweat all day (sort of difficult in my current office job, unless I really want to turn heads at work), and I have weird bird-radar, although I did not discover any new nests for the team that year.

Instead, I tried hard to do what I was supposed to do, and in my off time, successfully resisted the urge to turn all the scientific data charts tacked up on the rec room walls into personal art posters for my cabin.  I sat around the nightly fires and tried to follow conversations about forest flora and fauna, government land management, and what animal skulls had been discovered on the forest floor that day, but most of the time I went to bed thinking only of what I wanted to do with such dialogue in fiction.  (That, and how amazing it felt to have my feet out of my hiking boots for a night's rest.)

I was writing a novel at the time, but that wasn't my excuse for having a wildly different internal experience of the external conversations being had.  That is just what happens when I encounter new things.  I am entertained by the difference between the way I think and the way that others think - and I want to turn it all into art. 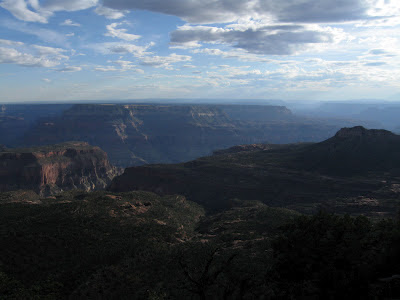 I wish I had a bigger metaphor, some over-arching point tonight.  Perhaps someone else can draw the lines between thermoclines and goshawks, movie screens and strangers on the street.  What's that, you say?  I got myself into this mess?

I know, I know.  Now someone please get me out.

How about a little Jack Kornfield?  He recently got me out of a sticky bind this summer.  I give you this, from his beautiful book about cultivating a spiritual life, or A Path With Heart:

"In the stress and complexity of our lives, we may forget our deeper intentions.  But when people come to the end of their life and look back, the questions that they most often ask are not usually, 'How much is in my bank account?' or 'How many books did I write?' or 'What did I build?' or the like.  If you have the privilege of being with a person who is aware at the time of his or her death, you find the questions such a person asks are very simple: 'Did I love well?'  'Did I live fully?'  'Did I learn to let go?'

But while you're at it, I hope you keep it fresh and cool, and as weird as you possibly can.

Stand still.  The trees ahead and bushes beside you
Are not lost. Wherever you are is called Here,
And you must treat it as a powerful stranger,
Must ask permission to know it and be known.
The forest breathes.  Listen.  It answers,
I have made this place around you.
If you leave it, you may come back again, saying Here.
No two trees are the same to Raven.
No two branches are the same to Wren.
If what a tree or bush does is lost on you,
You are surely lost.  Stand still.  The forest knows
Where you are.  You must let it find you. 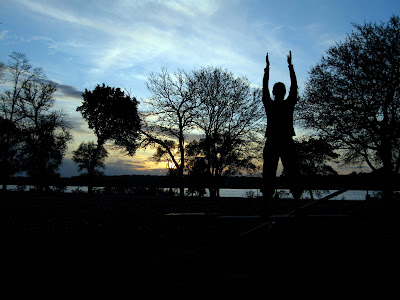 I've been reflecting lately how every step we take in our lives has value, and how we must trust the paths we've taken, for they have led us to where we are right now.

Or, as a page of my journal said it last month:

One of the most difficult of times I've had to trust myself was when I met my husband in grad school.  I was dating someone else at the time, and not ready to admit that my life needed to change.  But then I dreamed about Tim for twenty days straight.

These dreams piled on, and finally convinced me that I had to open up and listen to my now banging-a-gong, loudly chattering heart.  I needed to open to my life, which wanted to heal me.

It was a dramatic turn of events, but here we are almost six years later, two years of marriage under our belts, still learning from each other.

I used to be embarrassed that I have dated a few people in my life.  At the rehearsal dinner for our wedding, a dear friend's dear mother toasted Tim and I.  Not knowing Tim yet, said she knew he was one heck of a guy to be able to keep me.  I laughed, and glowed in the community circle that weddings provide.

She had known me best when I was in high school, just starting out in my dating career, and unafraid to make mistakes in love.

That is to say: when I was a little arrogant in the land of love.   A wee callus.  And a whole lot of fun.

With all these people in one room, I was nervous when my friend's mother started talking about my dating past - as any sane person would be.

But now when I think about it - both her recollection of it and my open and daring heart as a teenager - I recall the richness of it all: the qualities that drew me to these people, the lessons we learned together and taught one another, and the sweet goodness of life: that all the moments before lead to this one now, where I sit at a table and write to you and remember it all.

I joked recently that I understand why old people sit around and remember their lives, and tell the same stories again and again.  (We'll all be lucky if we still remember the stories we want to tell again and again, but that's a topic for a different time...)

Stories are our connection to life - they are how we learn, and how we love.

Cling lovingly to the stories you adore.  Or, as Kerouac wrote, Accept loss forever.  Accept that there is no right way to do things.  Accept that in this moment, you have taken every step you needed to take to be where you need to be right now.

Accept the perfection of your path - every winding, messy step of it.  And take a cue from the people who love you - we are all delighted by the show you've put on.

I once years back had an older but much unwiser professorial friend who told me after his seventh bloody mary:
-All you have to do is tell it like it is.
-But nothing is like anything, I replied, with a very precise Oriental smile.

"The wound is symbolic and cannot be reduced to any single interpretation.  But wounding seems to be a clue or a key to being human.  There is value here as well as agony."  -Jeanette Winterson's Why Be Happy When You Could Be Normal?

I guess I've been writing more about perceived mistakes than trauma or wounding in this post, but I think all of these subjects have to do with the vulnerability of being human, and the strength, beauty, and tenderness that come with that assignment.

This post is dedicated to my friends in western Colorado.

And now, go forth with compassion - for yourselves, and for our hungry, spinning world.  Be good to yourself, and to the ones you love.