"No" Is My Spirit Animal

"Like dancers, none of us gets over that figure we see in the practice mirrors: ourselves.  Choosing your twin gives you that reflection forever - or as long as it lasts.  Perhaps SL will leave me for one reason or another, but he will never go away: I see myself in him and he in me, except that for him our twinship is essentially private and silent.  So how do I justify putting our we-ness out in the world by writing about it?  I can't.  It's something I've always done; SL accepts this in me: half living life so I can get down to really living it by writing about it.  I wrote about my first kiss more fully than I lived it.  I wouldn't know what I looked like in relation to SL, my twin, if I didn't describe in on the page." 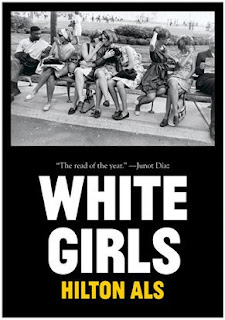 One of my friends recently "taught" the Michael Jackson essay in White Girls, a 2013 book with one of the greatest covers I've seen in a long time: serious and dramatic and artistic all at once.  When she told me she was reading the book, it made me want to revisit it.  I had already tried my hand at White Girls once but was, admittedly, put off by my background knowledge of Als as the theater critic for The New Yorker, a magazine my southern identity brushes up against forceably with uncomfortable results.

Remembering the electric, down-in-the-depths-of-the-library-stacks feeling I had while reading John Jeremiah Sullivan's Pulphead made me want to give White Girls another try.

Als' prose has its own weight and rhythm.  I like this description of his work, from Literary Hub ("Als is a master of consideration, rarely grasping for conclusions and instead commenting on the state of things with his deep knowledge of cultural theory, always rebounding with a very-Hilton, remarkably reflective mood").  Once I committed to White Girls, my whole being felt taken through a pipeline to some velvety, synapse-rearranging place where I became slightly smarter for the hours I was in his hands.  Then I basically lost that connection once the book was closed and all I could remember was: I had to think hard reading that.

But I loved that quote:  "It's something I've always done...half living life so I can get down to really living it by writing about it," and I remembered it for weeks after reading it.  The older I get, the more writing is one of the few things that makes any sense to me.  Reading, writing, making food and eating it, and spending time with my family are some of the only activities I have the bandwidth for right now, in addition to basic exercise and fresh air.  It took a long while to get to acceptance of that fact.  Once I did, though, once I realized that all the activities that used to make me happy, like drawing or going to yoga class or watching movie, were actually somewhat of a burden if I insisted on them too much as a mother, life got really simple.  At the same time, some force of internal life started to expand, breathing in the new space.

No, No, No, No has become my internal mantra over the past two years, as I've adjusted to raising a child and the presence, and surrender, that requires.

"No" is my spirit animal, drawing a deep line in the sand around me that I find very comforting right now.  Inside that line, there's a lot of room for whatever I want to put there.  It took becoming a mother to take myself seriously enough to put up those healthy fences, a fact I don't love but it's also okay.


In a wondrous essay about Eminem called "White Noise," discussing the lyrics to "Kim" from The Marshal Mathers LP, Als writes:

"The operative word here is 'look.' Given Mathers' background where all eyes were turned on Mom as she made scenes, could Mathers feel he was real?  That he existed? Moms and bullies sucked all the air out of the room.  In order to be heard, he did what born writers do: he learned to listen - to himself, and to others, to stories."

The lines that connect my life with Eminem's are so far apart there's probably some planetary term to describe them as bodies that will never orbit in the same stratosphere.  I wasn't bullied, I wasn't harassed, and my mom is such a delightful person many of my friends at one time or another have joked she should move in with them and be there every day when they wake up.  However, I love that idea: Born writers learn to listen: to themselves, and to others, and to stories.

To that I say: Amen.